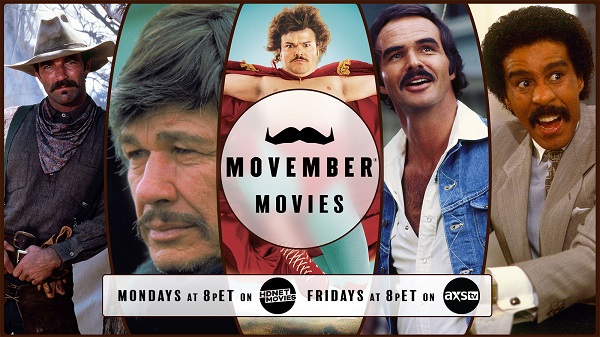 Los Angeles (October 20, 2020) – AXS TV and HDNET MOVIES are proud to partner with Movember —the leading charity foundation dedicated to men’s health around the world—for a month-long lineup celebrating mustachioed movie stars and bearded bravado in support of the organization’s efforts to help men improve their physical and mental wellbeing, empowering them to live happier, healthier, and longer lives. Every Monday in November, HDNET MOVIES will feature a back-to-back block airing at 8pE/5pP, while AXS TV starts the weekend off right with a roster of action epics and comedy classics airing every Friday at 9pE/6pP.

Since 2003, Movember has proudly stood at the forefront of men’s health advocacy, funding over 1,250 men’s health projects across the globe, challenging stigmas and stereotypes, driving research, and revolutionizing the way that vital health services reach and support men. Though not often talked about, men from all walks of life and every corner of the world are facing a serious health crisis affecting both their physical and mental health. By investing in the critical realms of prostate cancer, testicular cancer, mental health, and suicide prevention, Movember seeks to raise funds and awareness and start important conversations about the issues that affect men most—revitalizing the face of men’s health, preventing thousands of premature deaths, and giving families more time to spend with their beloved fathers, brothers, sons, partners, and friends. To get involved, please visit Movember.com.

HDNET MOVIES’ 10-film Movember block begins November 2 at 8pE with a double-dose of Charles Bronson, starring as a prisoner on a tense train ride through Breakheart Pass, and saddling up as Wild Bill Hickok to hunt down The White Buffalo. Other highlights include Kris Kristofferson as a father struggling to repair the family he left behind in Bloodworth, and Burt Reynolds as a racecar owner who enlists a seasoned veteran (Sylvester Stallone) to mentor a young hotshot in Driven (Nov. 16); Charles Bronson in the 1974 revenge classic Death Wish (Nov. 23) and the action-packed cross-country thriller Assassination (Nov. 30), and more.

AXS TV’s Movember lineup starts November 6 at 9pE with Sam Elliot and Tom Selleck in the 1982 Louis L’Amour Western The Shadow Riders, and also includes Burt Reynolds as an ex-con forced to bring an old friend to justice in Gator (Nov. 13); Richard Pryor as a baseball player desperately trying to spend Brewster’s Millions (Nov. 20); and Jack Black as a monk-turned-luchador in Nacho Libre (Nov. 27).

As part of the Movember festivities, AXS TV also presents a special “Saturday Stack” block featuring some of music’s most famous flowing facial follicles on November 14. The day opens with an encore broadcast of the Burt Reynolds hit Gator at 1pE, and also includes The Very VERY Best Of The 70s’ “Mustache Men” episode at 3:45pE and 3:15aE; the Country music documentary Alan Jackson: Small Town Southern Man at 4:15pE; a three-pack of concert films, interviews, and retrospectives highlighting beloved bearded trio ZZ Top in ZZ Top’s Billy Gibbons And The BFGs Go To Cuba at 6:15pE, Billy Gibbons’ sitdown with Dan Rather on The Big Interview at 7:30pE, and Rock Legends: ZZ Top at 8:30pE; followed by the moving Allman Brothers profile The Allman Brothers Band – After The Crash at 9pE and Rock Legends: The Allman Brothers Band at 11:15pE; guitar virtuoso Carlos Santana in Santana Live At The 1982 US Festival at 11:45pE, Rock Legends: Santana at 1:15aE, and The Big Interview: Santana at 1:45aE; and a look at one of rock’s most iconic supergroup’s in Rock Legends: Crosby, Stills, Nash & Young at 2:45aE.

“We’re thrilled to be teaming up with AXS TV and HDNET Movies to continue to raise awareness about men’s health while honoring the great moustaches in these classic films. Movember is committed to helping men across the globe and now, more than ever, we need to stay connected and have important conversations while enjoying some great films,” said Mark Hedstrom, US Executive Director of Movember.

In addition to these fan-favorite films, each block will put the spotlight on a series of informative PSAs from Movember, exploring different themes such as encouraging men to “Spot The Signs” and reach out to friends in need; empowering men to open up about their feelings and become “A Man Of More Words,” featuring personal anecdotes from entertainers and influencers Jonathan Bennett, Logan Henderson, Matthew Santoro, and Scott Sire; and inspiring men to not be ashamed to ask for help in the powerful “Be A Man of More Words” segment, featuring true stories from men who came back from the brink.

“Movember is a vital resource bringing awareness to the major issues impacting men’s health,” said Frank Tanki, General Manager of AXS TV and HDNET MOVIES. “AXS TV and HDNET MOVIES are proud to partner with them for this special event, helping to raise funds and awareness for an important cause while providing much-needed entertainment celebrating some of cinema’s most famous facial hair. We hope our viewers will join us in supporting Movember as they fight to improve the health and lives of men across the world.”

The Complete HDNET MOVIES and AXS TV Movember Lineup is as Follows: