In Memoriam – Celebrating the Movie Career of Philip Seymour Hoffman 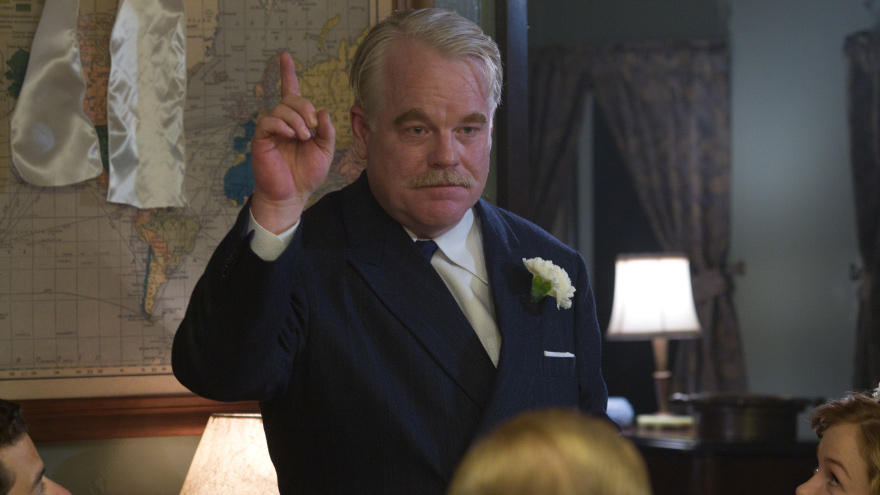 Philip Seymour Hoffman in The Master (2012)

Philip Seymour Hoffman cropped up on the Hollywood scene the same way he preferred to lead his personal life – discreetly and inconspicuously. It wasn’t until 2006, when he won the Academy Award® for Best Actor for Capote that the world took notice of his outstanding acting abilities. By that time, he had already starred in nearly 40 movies in just 15 years and acted in, or directed, 15 Broadway productions. This month, we honor his acting legacy on HDNET MOVIES with a triple feature A-List spotlight on Hoffman, with the network premieres of A Most Wanted Man and Doubt, plus the film that earned him his final Oscar® nomination, The Master. Below, read some excerpts from interviews where he shares his thoughts on acting, directing, and why reading books on set interfered with his craft.
Hoffman on “falling in love with the theater” at a young age (2008):
I didn’t even want to be an actor then. I was just a big theater fan, just really enjoyed a good play. But then in high school, I started auditioning and I loved the camaraderie of it, the people, and that’s when I decided it was what I wanted to do.[1]
Hoffman on getting his start in front of the camera (2008):
Like everybody else, I did an episode of ‘Law & Order. I went out to LA for awhile, and tried to get into films. But it wasn’t until ‘Scent of a Woman’ that I started working regularly. There are many different things that keep propelling you forward, but that was a major part of the beginning. I really felt like I’d won the lottery.[1] 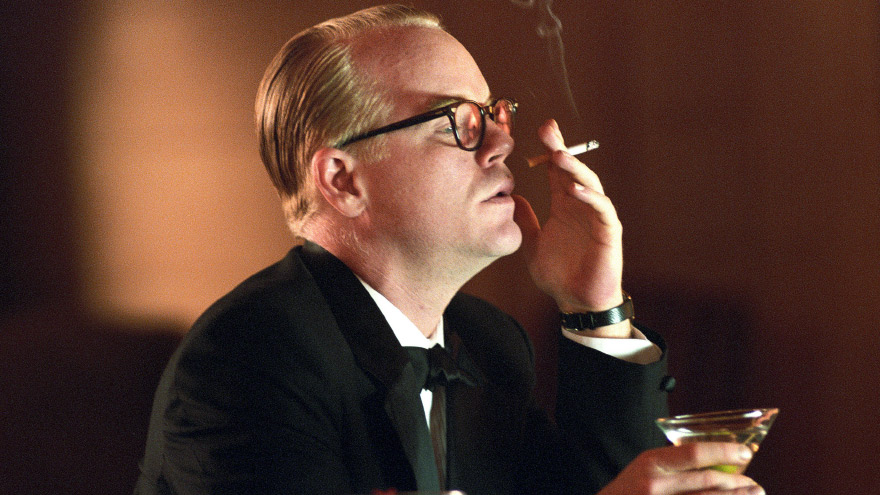 Hoffman on acting (2006):
If you can go to the theatre, and you’re in a room with a bunch of other people. And what’s happening in front of you is not happening. But you actually believe it is. If I can do that, I’ve done my job. And that’s the thing — that is a drug. That’s a drug. That’s something you get addicted to.[2]
Hoffman on acting and directing (2008):
They do inform each other. I don’t think any actor can be a director, or any director can be an actor. But I would say that acting helps you become a better director. And directing helps you become a better actor—if you have that visual sense, because as a director you need that sense of design, and of storytelling. You can’t just instruct the actors to act well. You have to create a whole event. But switching hats helps, because as a director you’re able to see yourself objectively through other actors. You watch other actors and you see yourself.[3]
Hoffman on why he cannot read books while shooting a serious film (2004):
My first job, Scent of a Woman, I remember taking the bus upstate to where we were shooting and I was reading The Prince of Tides. I was so caught up in that book and when I got off the bus I was beside myself. The book just wrecked me. I was like twenty-four years old. All that stuff with the tiger. People have a lot of opinions about Conroy, but that book is very, very moving. I remember being incredibly upset and moved and I had to go to work in two hours. It screwed me up so bad. All I could think about was this damn book, and I had to play this impressionable kid who could really give a shit about reading books.[4] 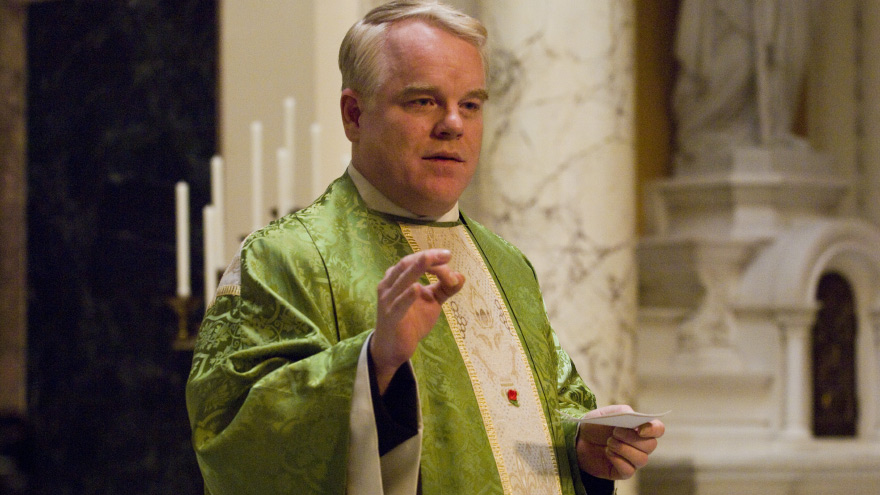 Hoffman on playing unfavorable characters (2006):
Well, I think if you look at any actor who isn’t just playing heroes, that’s what their résumé looks like. There are characters in movies who I call ‘film characters.’ They don’t exist in real life. They exist to play out a scenario. They can be in fantastic films, but they are not real characters; what happens to them is not lifelike. But ultimately if you’re not the actor playing that hero, that ‘film character,’ then you’re taking on other roles in other movies, and you’re going to be playing characters with a slightly more realistic view of what life is like. Ultimately, all characters have some negative and positive energies. That’s just how I see it. I didn’t go out looking for negative characters; I went out looking for people who have a struggle and a fight to tackle. That’s what interests me.[5]
Hoffman on the potential of playing a conventional leading man (2011):
Well, I don’t think they exist any more. They’re a myth now. I mean, do they make really good movies with leading men any more? I don’t think the romantic leading guy is around any more, and I don’t really think I would be that guy if he was. I don’t think those are really interesting characters.[6] 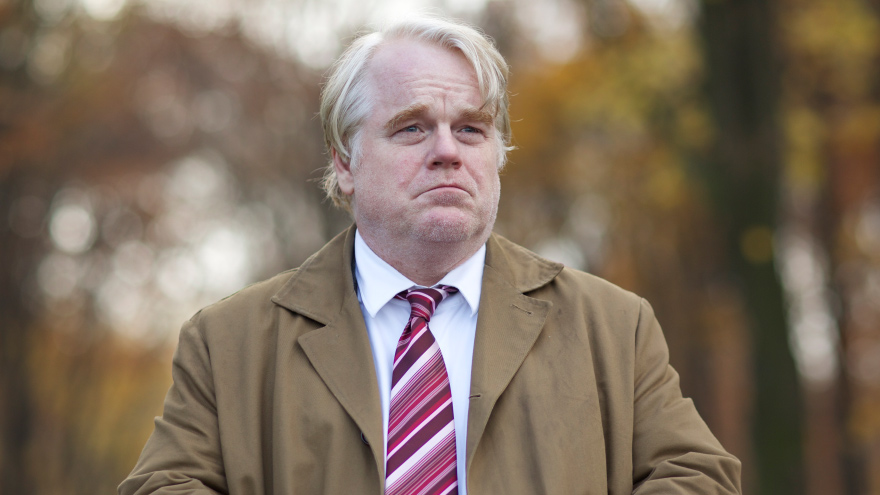 Philip Seymour Hoffman in A Most Wanted Man (2014)

Hoffman on keeping his personal and professional life separate (2006):
I think part of being an actor is staying private. I do think it’s (an) important part of doing my job — is that they believe I’m someone else. You know, that’s part of my job. And if they start watching me and thinking about the fact that I got a divorce or something in my real life. Or these things, I don’t think I’m doing my job.[7]
Hoffman on letting go of judgement when playing a character (2010):
I think if you start to look at something from someone else’s perspective, it starts to make sense. But you have to allow yourself to do that. And I think that that’s why some people are actors and some people aren’t. I think the people that are good at it are the people who allow themselves to create empathy for people who they might in life judge very harshly. I think people in life do it too, but some people have a harder time letting go of their judgment. That doesn’t make them a worse or better person. But as an actor, you definitely have to, as you’re playing that part, not worry about how you think about that character, that person…Do you know what I mean? Actors have to go, ‘I don’t just have to understand how to think like this person, I actually have to personalize it,’ and make it their own somehow, and advocate for the character. And that’s a step that isn’t very comfortable all the time, and isn’t very easy all the time. But that’s that art form, and that’s what they do.[8]
Tune into HDNET MOVIES on Thursday, August 10th for The A-List: Philip Seymour Hoffman and watch the remarkable actor in three of his most profound roles:

A Most Wanted Man – 6:50/5:50c
A German intelligence agent (Hoffman) must quickly figure out whether a half-Chechen, half-Russian Muslim man (Grigoriy Dobrygin) who appeared in Hamburg is a refuge or a terrorist hell-bent on destruction.

Doubt – 9/8c
The strict and fear-inspiring principal (Meryl Streep) at a Church school despises the popular parish priest (Hoffman), and after uncovering what she believes to be disturbing facts about him, she begins a crusade to expunge him from the school.

The Master – 10:50/9:50c
The journey of a Naval veteran (Joaquin Phoenix) who arrives home from war unsettled and uncertain of his future until he is tantalized by The Cause and its charismatic leader (Hoffman).