This month on HDNET MOVIES, we are highlighting films that were adapted from works of literature in our Page to Screen lineup. Sometimes with adaptations the source will be obvious, i.e. Crime and Punishment or The Valley of the Dolls, which was the biggest selling novel of 1966. But other titles will shock you because the novels they are based off of never quite made it into the public eye. Which titles are those? Read through the list of 26 movies below to find out, and then tune in every Monday night in April starting at 7/6c to catch a few of these titles on HDNET MOVIES. 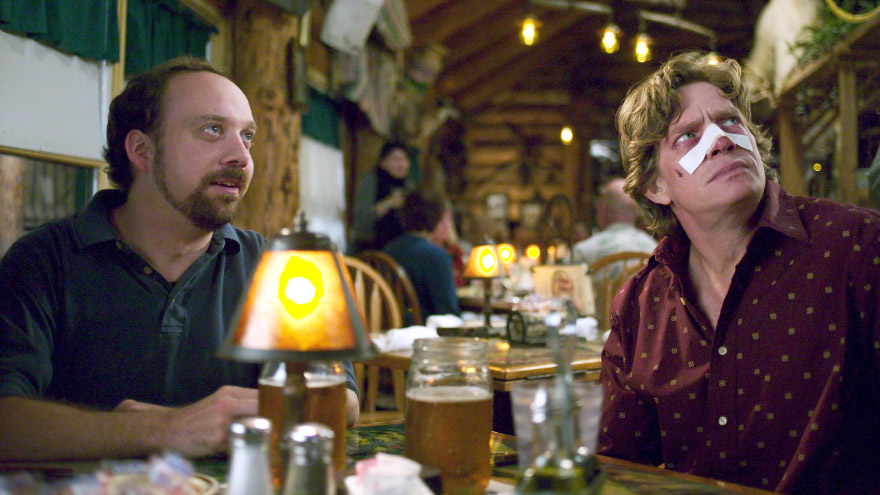 Based on: Sideways (2004) by Rex Pickett
Pickett has since written two sequels to this novel, Vertical (2011) and Sideways 3 Chile (2015), but Sideways director Alexander Payne said he has no interest in directing a sequel. 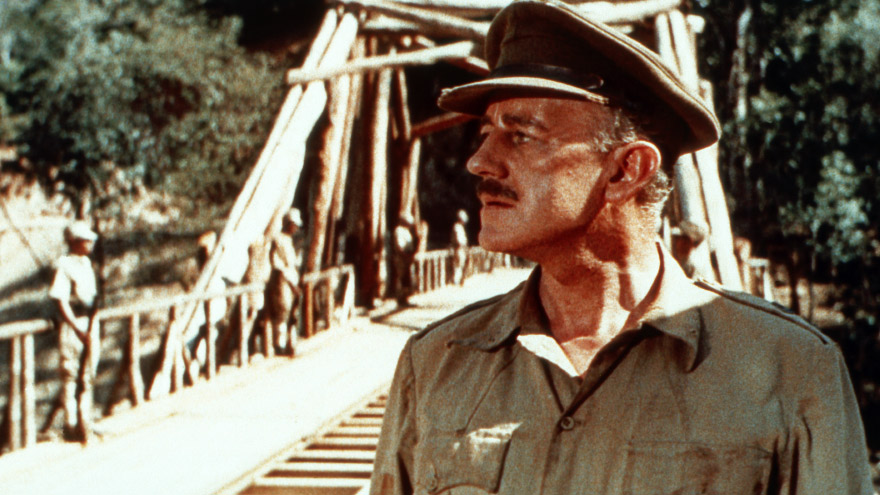 Alec Guinness in The Bridge over the River Kwai (1957)

Based on: Le Pont de la Rivière Kwai (1952) by Pierre Boulle
The bridge is fictional, but after the movie’s release, tourists flocked to Thailand to see it, causing major problems for the Thai people. The film was actually shot in Sri Lanka. 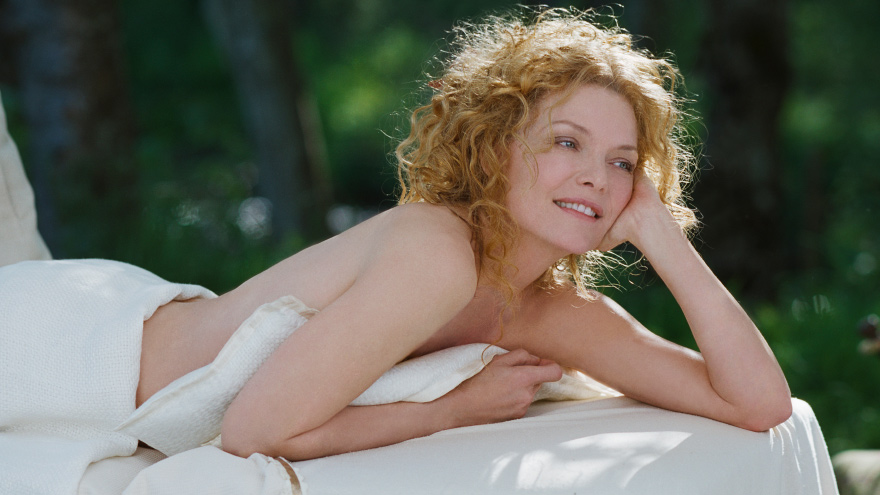 Based on: Chéri (1920) by Colette
The novel was first adapted to film in 1950, then to television two times, in 1962 and 1973, and then to a ballet in 1980 at the Edinburgh Festival. The final film adaptation, starring Michelle Pfeiffer and Rupert Friend, was selected by the Berlin Film Festival in the official competition. 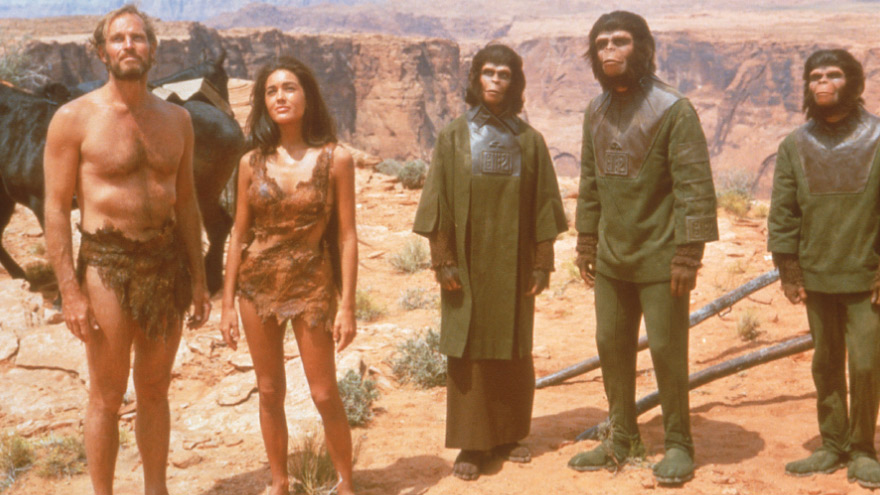 Charlton Heston and Linda Harrison in Planet of the Apes (1968)

Based on: La Planète des Singes (1963) by Pierre Boulle
This novel launched the entire Planet of the Apes media franchise, comprised of eight films to date beginning with the 1968 adaptation starring Charlton Heston. 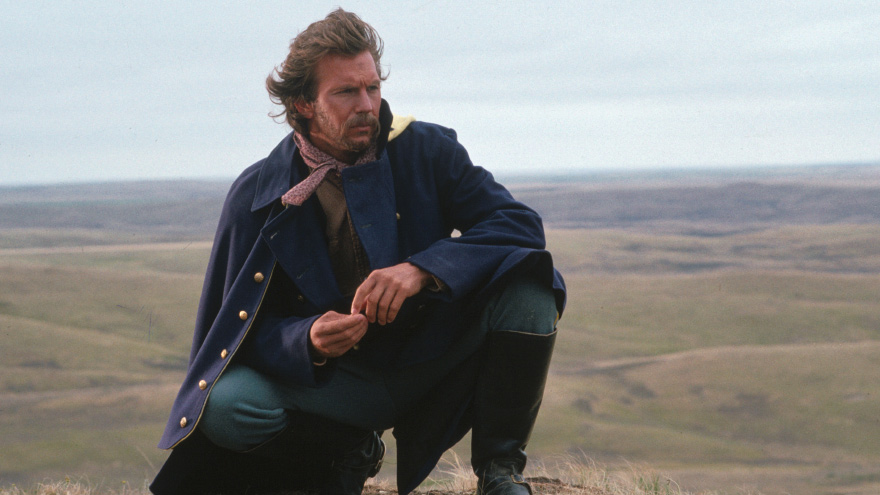 Kevin Costner in Dances With Wolves (1990)

Based on: Dances With Wolves (1988) by Michael Blake
Blake initially wrote Dances With Wolves as a spec script, then published it as a novel after Kevin Costner urged him to. It took two years for it to get published, but Costner bought the rights immediately and made the film. Blake won the Academy Award for Best Adapted Screenplay. 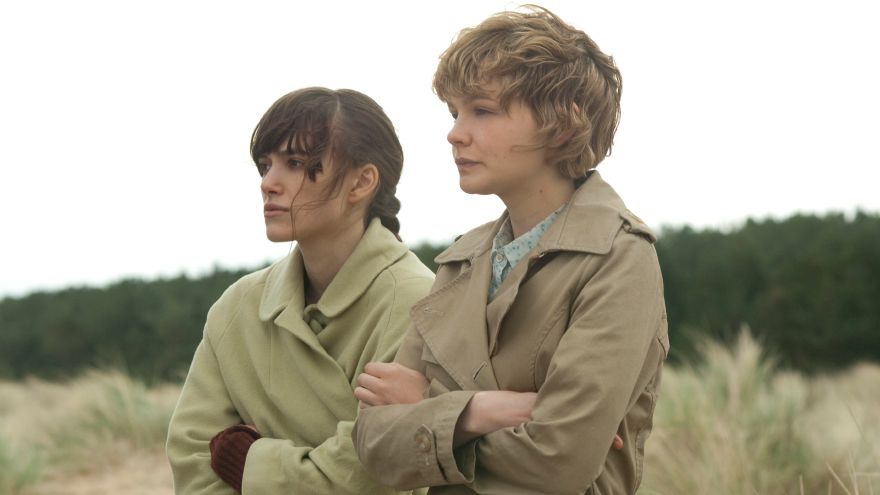 Keira Knightley and Carey Mulligan in Never Let Me Go (2010) 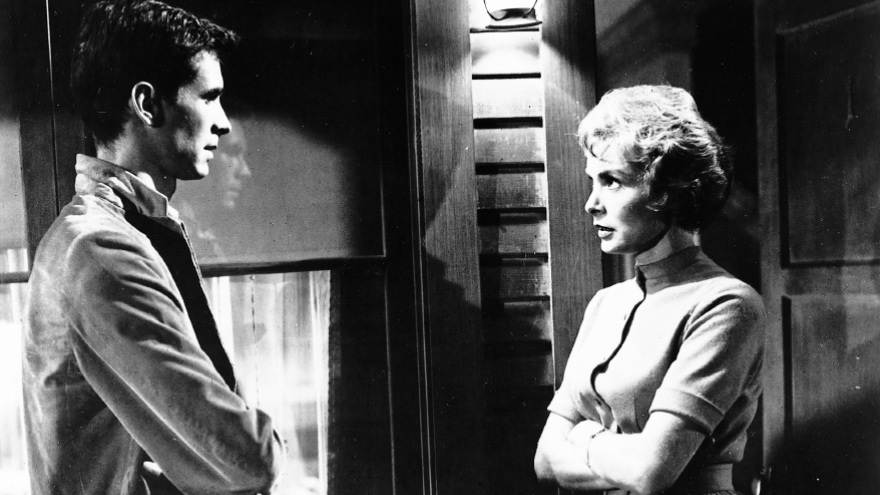 Based on: Psycho (1959) by Robert Bloch
Alfred Hitchcock asked his production assistant to buy every copy of the book Psycho to keep audiences from reading it and learning the shocking truth at the end. 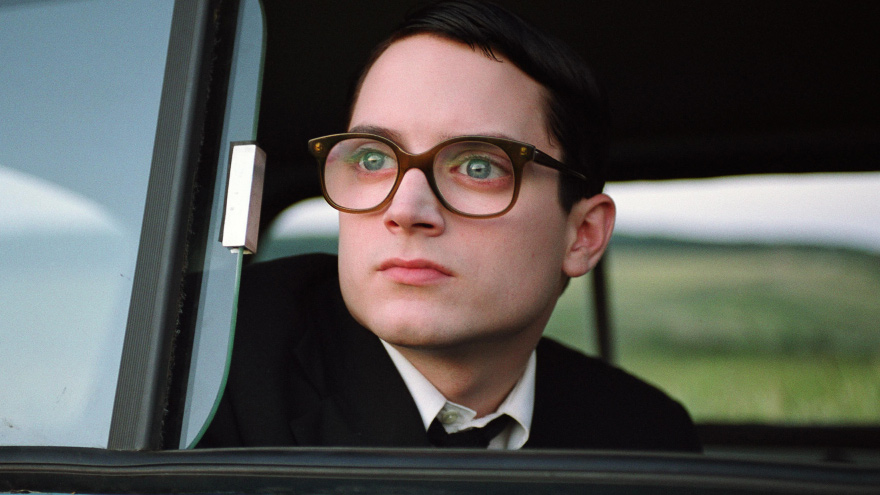 Elijah Wood in Everything Is Illuminated (2002)

Based on: Everything Is Illuminated (2002) by Jonathan Safran Foer
The film marked actor Liev Schreiber’s directorial debut. Before filming, he traveled to Ukraine to mimic the journey the main character took, which was similar to his journey before immigrating to the United States. 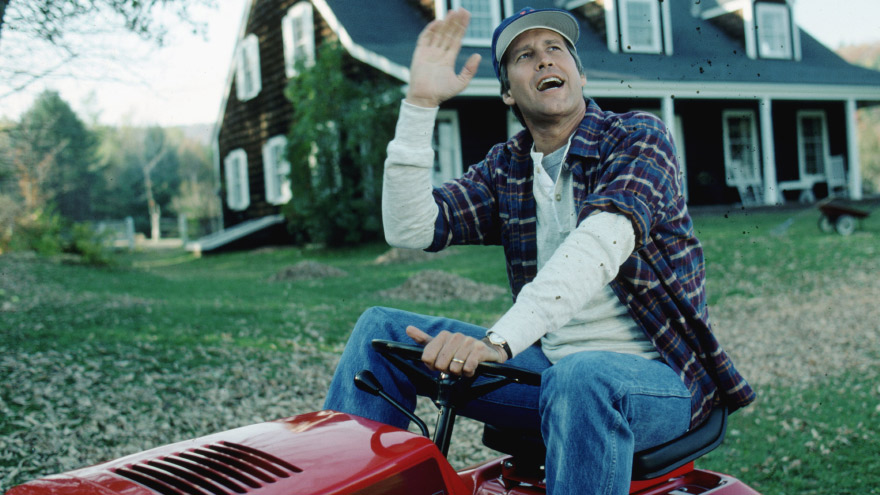 Based on: Funny Farm (1985) by Jay Cronley
Several of Cronley’s novels have been adapted to film: Good Vibes (1979) was made into Let It Ride (1989) starring Richard Dreyfuss; Quick Change (1981) resulted in two film adaptations, one set in French-speaking Montreal; and Cheap Shot (1984) was made into a French film titled Nos Amis Les Flics (2004). 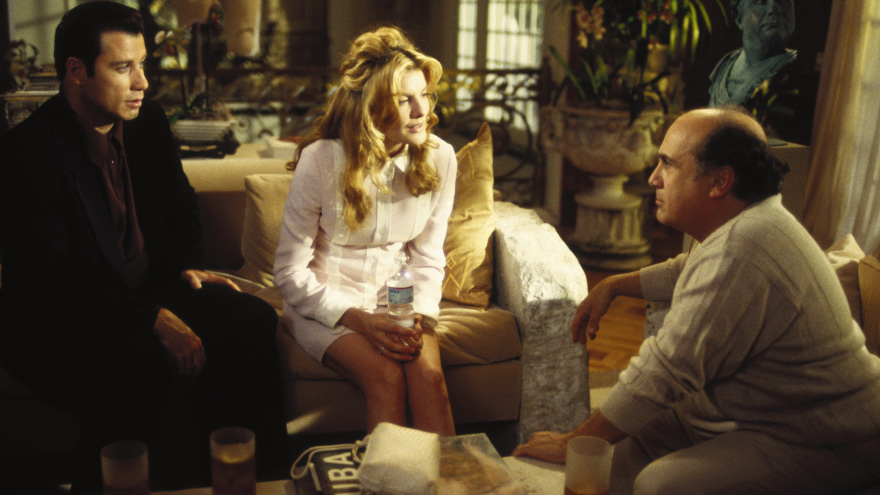 John Travolta, Rene Russo and Danny DeVito in Get Shorty (1995)

Based on: Get Shorty (1990) by Elmore Leonard
There is a real-life Chili Palmer, played by John Travolta in the film, but he is not a loan shark. He used to do research for Leonard’s books and one day Leonard called him up and said, “I really want to use your real name for the character in one of my books,” and Palmer told him to go ahead. 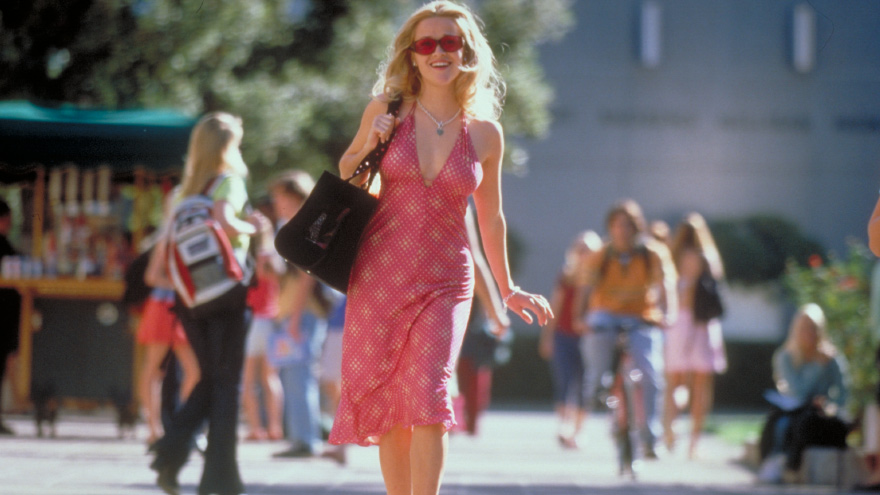 Based on: Legally Blonde (2001) by Amanda Brown
The novel was based on Brown’s experiences while attending Stanford Law School. 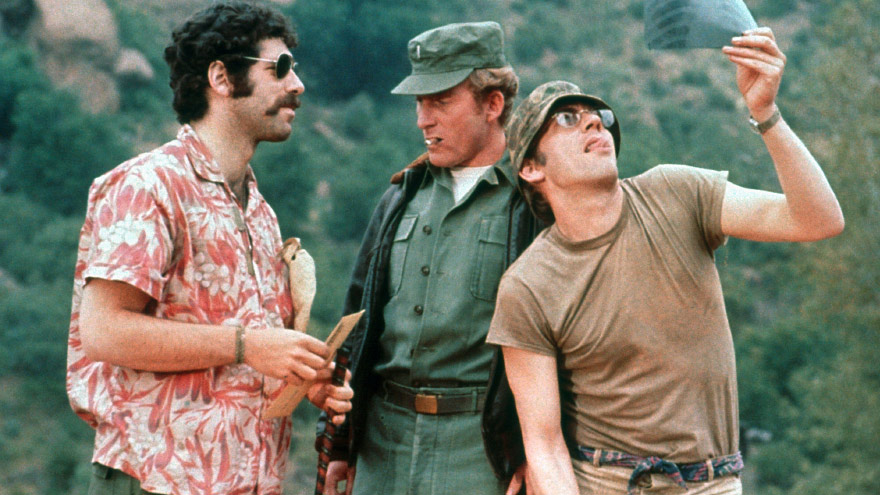 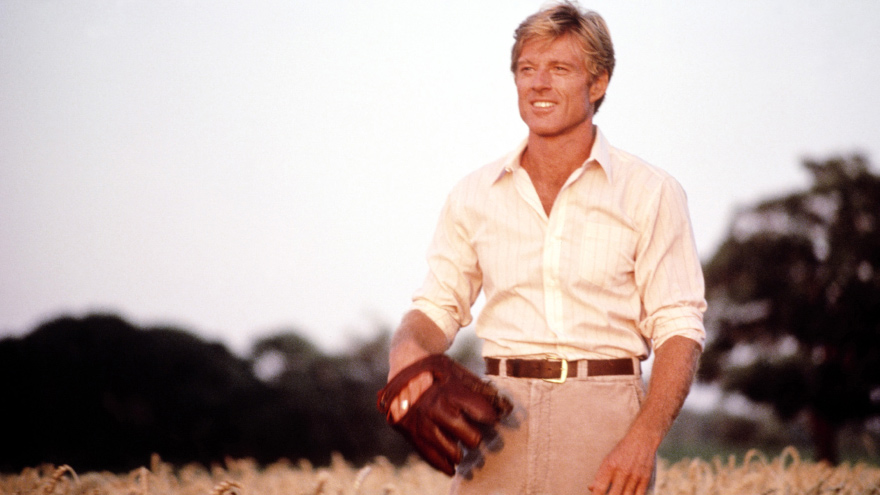 Based on: The Natural (1952) by Bernard Malamud
The movie was not a literal adaptation of the novel, but Malamud’s daughter stated her father was quite pleased with the result because it “legitimized him as a writer.” 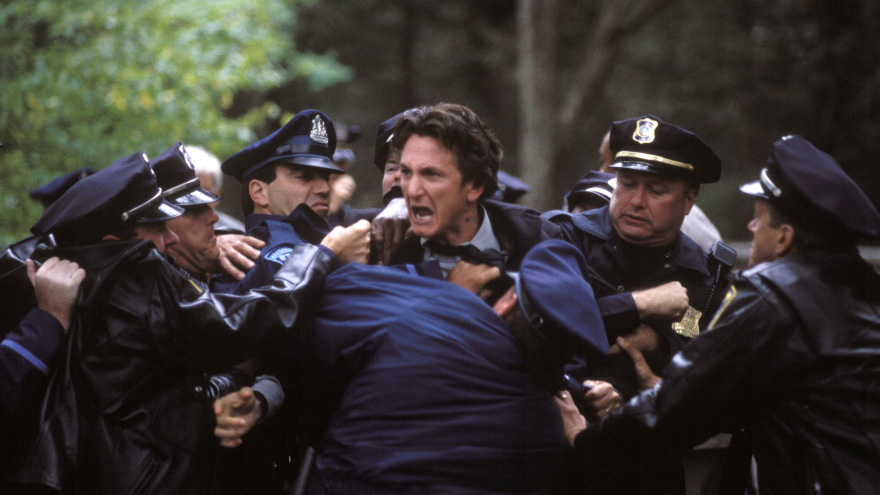 Based on: Mystic River (2001) by Dennis Lehane
Director Clint Eastwood was so taken with the book after reading it, that he immediately optioned it. He even sacrificed his salary to work on it because Warner Brothers, the only studio willing to fund the film, agreed to do so for a very low amount. Every other studio was wary of the child molestation aspect of the book and reluctant to address it. 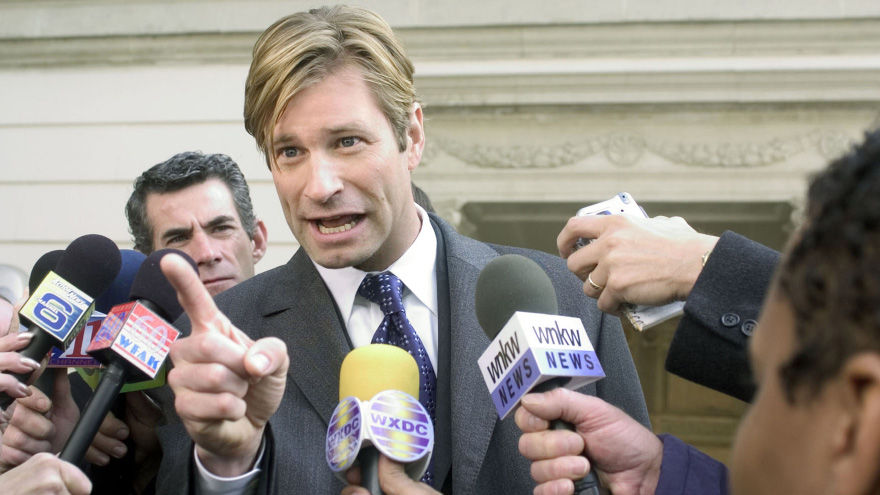 Aaron Eckhart in Thank You for Smoking (2005)

Based on: Thank You for Smoking (1994) by Christopher Buckley
Mel Gibson originally bought the rights to the novel, and filmmaker Jason Reitman independently wrote a screenplay, which he gave to Gibson. Gibson loved his screenplay, but lacked the funds to make the film. Reitman eventually secured funding with the creators of Paypal, who purchased the rights from Gibson and brought the novel to life on the silver screen. 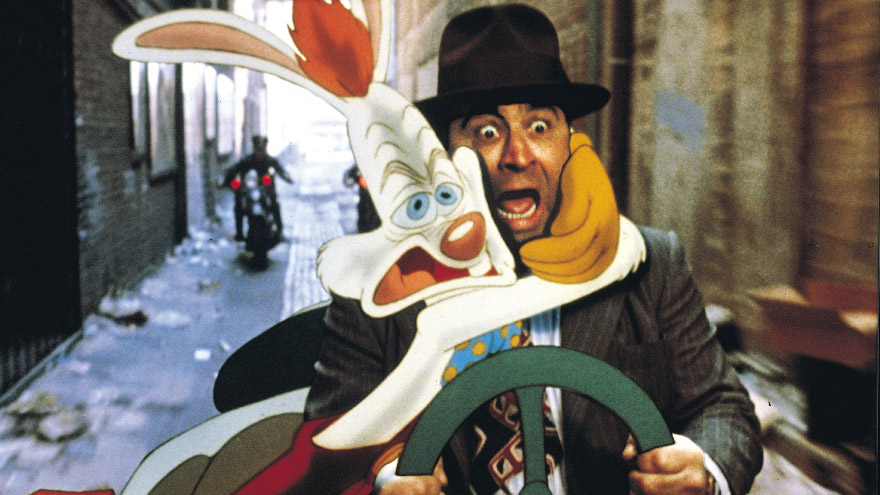 Based on: Who Censored Roger Rabbit? (1981) by Gary K. Wolf
The basic plot of the book and movie are quite different in terms of setting, time period, appearances of characters, and a majority of the dialogue. So, in 1991 when Wolf wrote the sequel to Who Censored Roger Rabbit?, he attempted to connect it more to the movie than to the first novel. 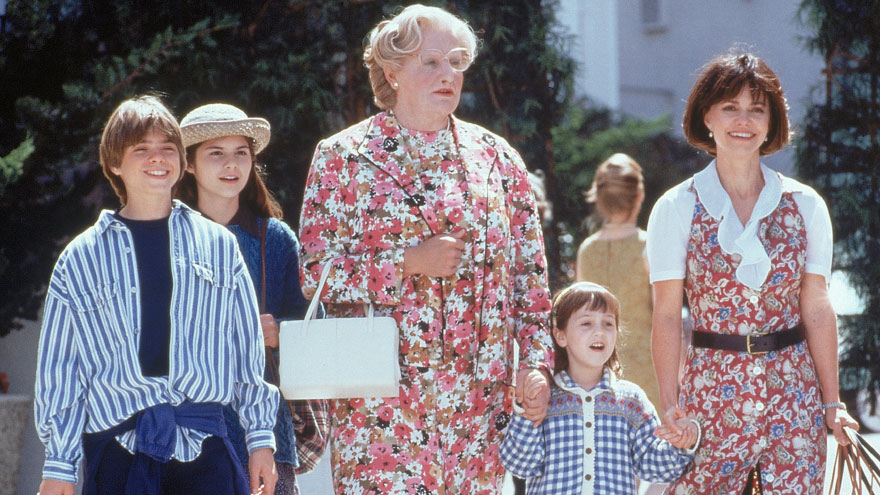 Based on: Madame Doubtfire (1987) by Anne Fine
The book, which Fine intended to be read by children, was written after she spent five years in California and saw how well parents their handled divorce. The cross-dressing aspect was only meant to be used as a theme, not the focus of the film. 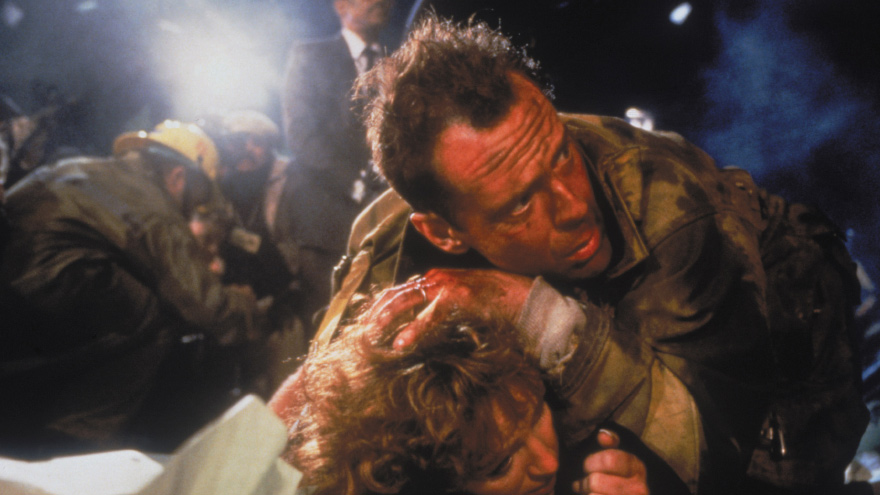 Based on: Nothing Lasts Forever (1979) by Roderick Thorp
Thorp wrote Nothing Lasts Forever, which is the follow-up to his 1966 novel The Detective, thinking Frank Sinatra would play Joe Leland. Sinatra played Leland in the 1968 film The Detective. When Sinatra declined, along with a few other actors, Bruce Willis scored the lead role though his character’s name was changed to John McClane. 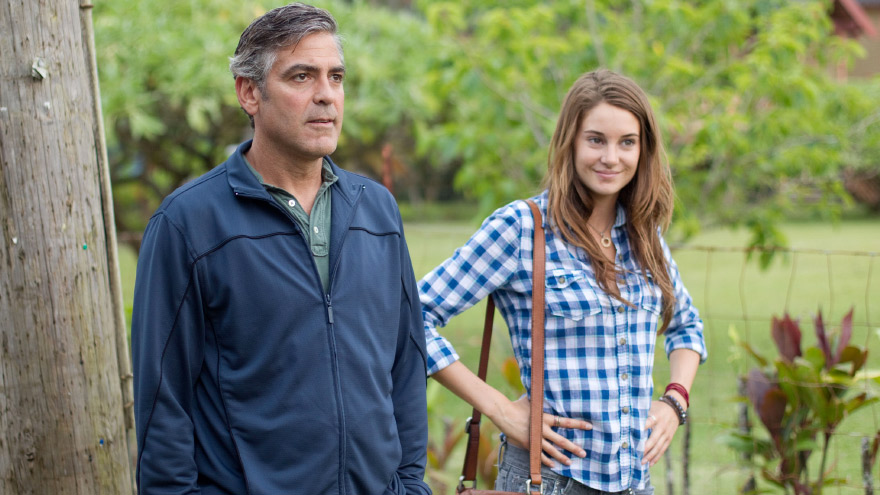 George Clooney and Shailene Woodley in The Descendants (2011)

Based on: The Descendants (2007) by Kaui Hart Hemmings
When filmmaker Alexander Payne asked Hemmings who she pictured as her main character, Matt King, she said George Clooney. Payne cast Clooney soon thereafter, and he also let Hemmings watch the audition tapes of the other actors, which she said was very entertaining. 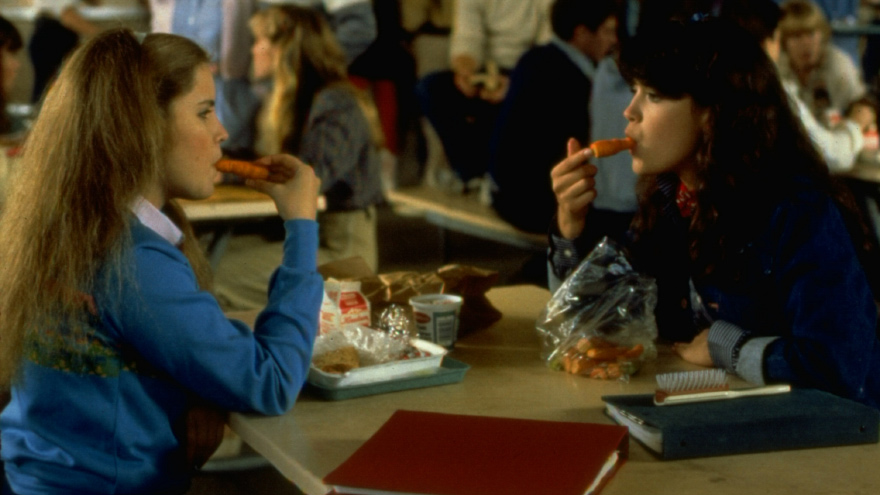 Based on: Fast Times at Ridgemont High (1981) by Cameron Crowe
Crowe, who also wrote the screenplay for the film, re-enrolled at a high school in San Diego while working as a freelance journalist and based his book on the experiences he had during that year. 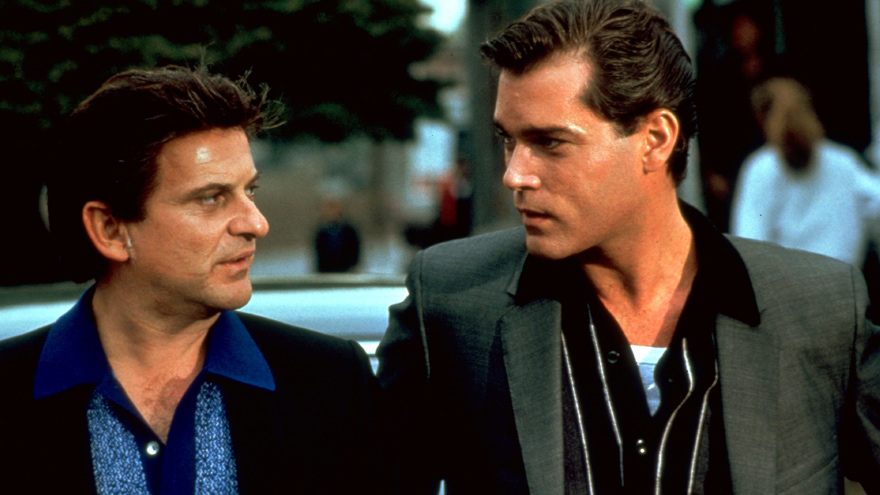 Based on: Wiseguy: Life in a Mafia Family (1986) by Nicholas Pileggi
Pileggi, who helped write the screenplay, stayed in touch with the real-life Henry Hill, the main character in the film played by Ray Liotta, as he wrote the film. He wanted the dialogue to be verbatim, making sure it had all the “nuance and flavor” of Hill himself. 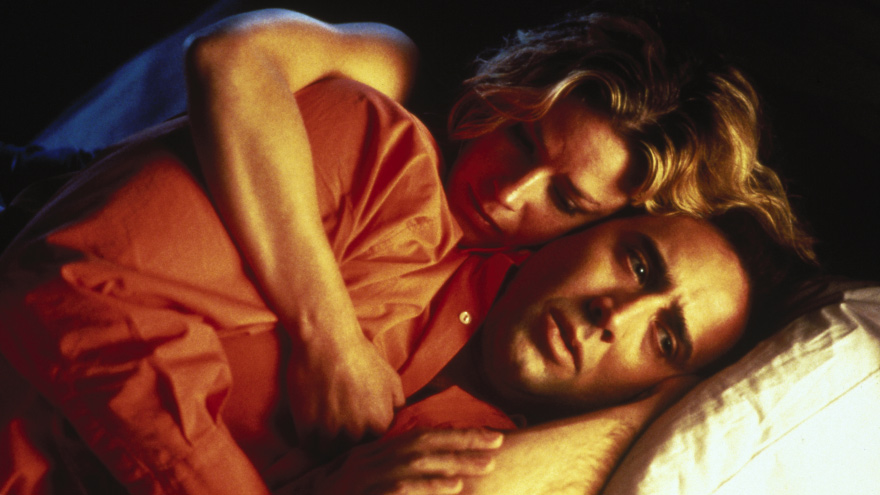 Based on: Leaving Las Vegas (1990) by John O’Brien
Like the main character in his novel, O’Brien was an alcoholic and at the age of 33, just two weeks after learning his semi-autobiographical book would be made into a movie, he shot and killed himself. His sister says the book/movie was the “fantasy version of John’s exit” and his actual death “was nothing like that.” 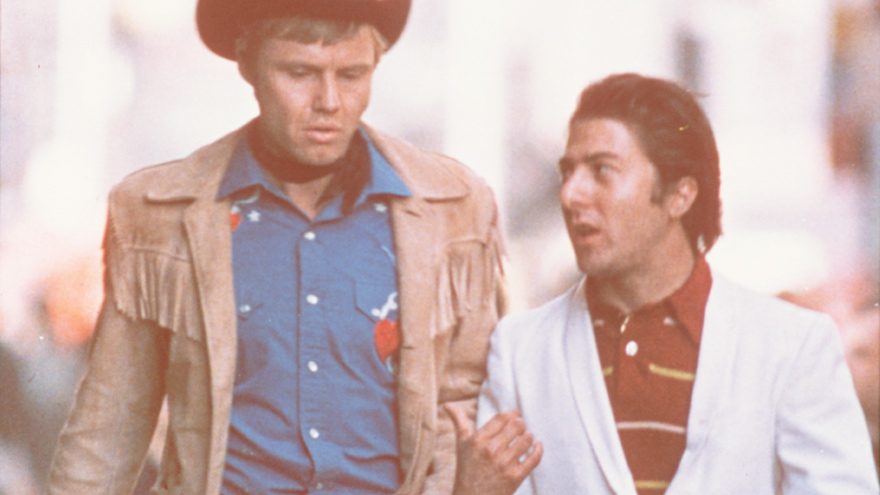 Based on: Midnight Cowboy (1965) by James Leo Herlihy
A number of screenwriters that director John Schlesinger and producer Jerome Hellman auditioned for the film called the book “rubbish” and one even said it would never work if Ratso had a limp. Waldo Salt, a Communist who had been blacklisted in 1951, wrote the final screenplay and won the Academy Award for it. 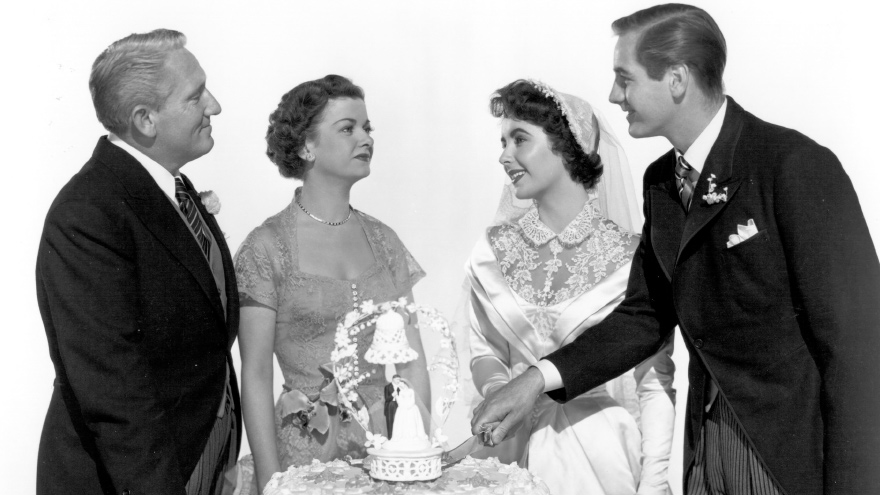 Based on: Father of the Bride (1949) by Edward Streeter
The film was so popular, that MGM made it into a TV show in 1961, which lasted one season. And 30 years after that, Touchstone Pictures produced a remake starring Steve Martin and Diane Keaton, which was so successful that a sequel was released four years later. 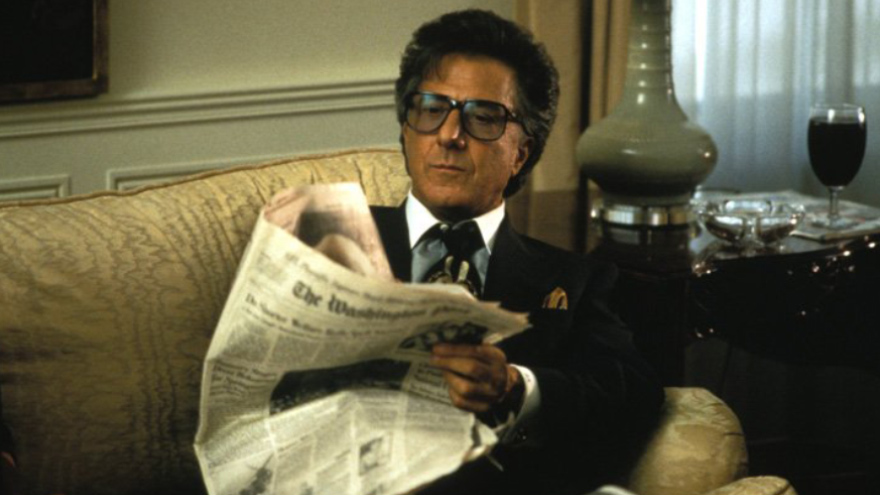 Based on: American Hero (1993) by Larry Beinhart
Beinhart based American Hero, which is fictional, on the fabricated stories Bush I Administration produced about the Iraqis to justify the first Gulf War. In the book, a fake war helps President Bush win reelection and in the movie, a war is falsified to overshadow a sex scandal the President is involved in. 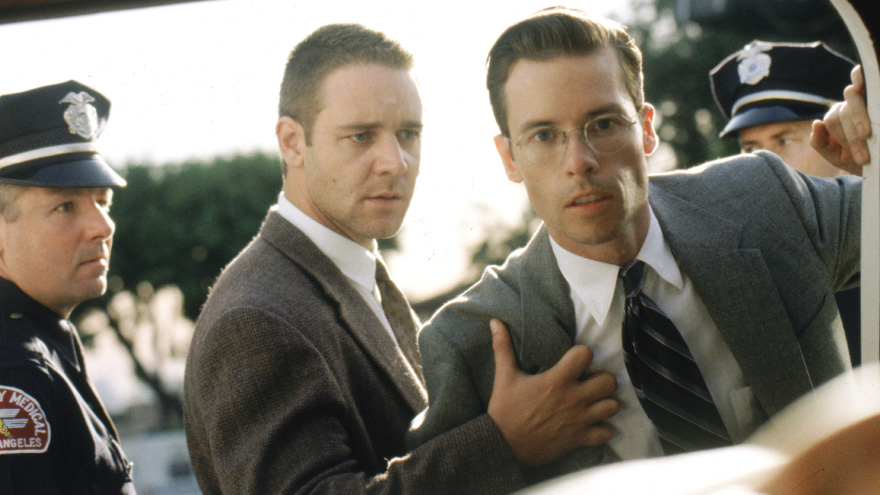 Based on: L.A. Confidential (1990) by James Ellroy
When director Curtis Hanson died in 2016, Ellroy wrote a eulogy in Variety magazine, in which he said, “My dramatic sense and Curtis’s dramatic sense were always at odds. It didn’t matter. I don’t make movies, Curtis Hanson didn’t write novels. He gave me the gift of my words in a luminous new form.”