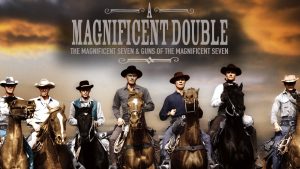 HDNET MOVIES PRESENTS A GRAND SLAM LINEUP OF BALL PARK FAVORITES FEATURING ‘FOR LOVE OF THE GAME,’ ‘THE SANDLOT’ & MORE, ON TUESDAY, OCTOBER 25

Other Highlights Include a ‘MAGNIFICENT SEVEN’ Double Feature, a ‘High School Hijinks’ Comedy Block, and a Salute to ‘THE ROCKY HORROR PICTURE SHOW’

Los Angeles – Sept. 26, 2016 – HDNET MOVIES unveils a fabulously fun October roster, packed with beloved adventure epics, big league favorites, sidesplitting teen comedies, cult classics, and more. The month begins on Saturday, October 1, with a posse of Old West heroes in the western double-feature “A Magnificent Double”, starring cinema icons Yul Brenner, Eli Wallach, Steve McQueen, and more as a motley crew tasked with protecting a Mexican village from bandits in THE MAGNIFICENT SEVEN, at 9pE, in celebration of the recently released remake. Then, a gunslinger plots a daring jailbreak in GUNS OF THE MAGNIFICENT SEVEN, with George Kennedy, James Whitmore, and Joe Do Baker at 11:15pE.

Tune in for a night of teenage hits in the “High School Hi-Jinks” block on Sunday, October 16. The evening kicks off with four friends scheming to stop a serial playboy in JOHN TUCKER MUST DIE, with Jesse Metcalfe, Brittany Snow, and Sophia Bush, at 7:25pE. Next, Molly Ringwald stars as a girl whose Sweet Sixteen is anything but in John Hughes’ quintessential 1984 comedy SIXTEEN CANDLES, with Anthony Michael Hall, at 9pE; followed by Melissa Joan Hart, who tries to make her crush jealous by taking Adrian Grenier to the prom in DRIVE ME CRAZY, with Ali Larter, at 10:40pE. And, at 12:15aE, small town Texas teens let loose on the last day of school in Richard Linklater’s DAZED AND CONFUSED, with Ben Afflek, Renee Zellweger, and Matthew McConaughey in his big screen debut.

Get ready to do the Time Warp again, with a special screening of the original 1975 cult classic THE ROCKY HORROR PICTURE SHOW on Wednesday, October 19 at 9pE—the night before the 2016 remake premieres on FOX. The iconic musical stars Susan Sarandon and Barry Bostwick as a square couple, whose mundane lives are turned upside down when they’re forced to take shelter in the home of the eccentric Dr. Frank-N-Furter (Tim Curry), on a dark and stormy night where anything can happen. Richard O’Brien, Patricia Quinn, and Meat Loaf also star.

Gear up for the Fall Classic, as HDNET MOVIES presents a homerun lineup of baseball gems with “Let’s Play Ball” on Tuesday, October 25. The day begins at 5pE, with a young boy on a cross-country quest to return Babe Ruth’s bat in the animated family film EVERYONE’S HERO, featuring the voice talents of Robin Williams, Forest Whitaker, and William H. Macy. Then, Kevin Costner stars as an aging pitcher reflecting on his life and love during the last game of his career in FOR LOVE OF THE GAME, with Kelly Preston and John C. Reilly, at 6:35pE; followed by the 1993 favorite THE SANDLOT, where childhood friends bond over baseball, at 9pE. And Thomas Ian Nicholas stars as a pitching prodigy who takes baseball by storm in ROOKIE OF THE YEAR, with Gary Busey, at 10:45pE.

HDNET MOVIES’ October highlights are as follows (all times eastern):