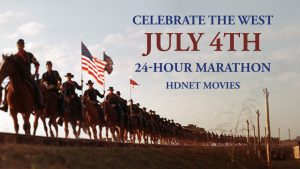 Other July Highlights Include a ‘Pink Panther’ Marathon July 27, a UFO Day X-FILES Two-Pack, and a 5-Film “Action Injection” on July 23

Los Angeles – June 24, 2016 – Stay cool this summer with HDNET MOVIES, as the network presents a fully-loaded July lineup featuring crime comedies, Old West favorites, sci-fi thrillers, and action epics. The month begins with an out of this world X-FILES double feature, in honor of UFO Day on Saturday, July 2, as Agents Mulder (David Duchovny) and Scully (Gillian Anderson) race against time to stop a deadly extraterrestrial virus in THE X-FILES: FIGHT THE FUTURE at 8pE. Then, a psychic priest helps the duo solve a case of disturbing disappearances in the network premiere of THE X-FILES: I WANT TO BELIEVE at 10:05pE.

HDNET MOVIES gathers a posse of All-American Western favorites in a 24-hour marathon to “Celebrate The West,” on Monday, July 4. The day starts at 6aE with Paul Newman as an outlaw with a unique brand of justice in THE LIFE AND TIMES OF JUDGE ROY BEAN. Spencer Tracy uncovers a small town’s violent past in BAD DAY AT BLACK ROCK at 8:10aE; followed by Henry Fonda in A BIG HAND FOR THE LITTLE LADY, at 9:40aE; Paul Newman in HOMBRE, at 11:20aE; and Jason Robards in Sam Peckinpah’s THE BALLAD OF CABLE HOGUE, at 1:15pE. Then, Union officers John Wayne and William Holden go behind enemy lines in THE HORSE SOLDIERS, at 3:25pE. And Glenn Ford builds an Old West newspaper empire in CIMARRON, at 5:30pE. All of the titles repeat in the evening to complete the 24-hour marathon.

Gear up for an extra-strength “Action Injection,” as HDNET MOVIES puts the spotlight on five star-studded thrillers, on Saturday, July 23, at 6:10pE as John Travolta and Christian Slater star as Air Force pilots on a top-secret nuclear mission in BROKEN ARROW. Next, Bruce Willis must protect a young genius from assassins in MERCURY RISING, with Alec Baldwin, at 8pE; followed by Colin Farrell as a publicist held hostage by a mysterious gunman in PHONE BOOTH, with Kiefer Sutherland, at 10pE. Then Kevin Spacey goes toe-to-toe with Samuel L. Jackson in THE NEGOTIATOR at 11:25pE and Natalie Portman stars as an orphan who learns the ways of hit man Jean Reno in THE PROFESSIONAL, at 1:50aE.

For a complete schedule of films and times, visit www.hdnetmovies.com/schedules. In addition to airing these films on the dates noted above, some of the movies mentioned are scheduled for further broadcasts throughout the month. (See listings for further details.)

HDNET MOVIES July highlights are as follows (all times eastern):

New movies coming to HDNET MOVIES in July include:

THE ADVENTURES OF ROCKY AND BULLWINKLE (2000)