HDNET MOVIES Celebrates 30 Years of ‘Stand By Me’ Aug. 8 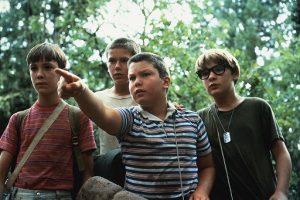 HDNET MOVIES CELEBRATES 30 YEARS OF ‘STAND BY ME’ WITH A BACK-TO-BACK SCREENING OF THE 1986 STEPHEN KING CLASSIC ON MONDAY, AUGUST 8—THE DATE OF ITS ORIGINAL RELEASE—AT 8pE

Los Angeles – July 25, 2016 – HDNET MOVIES pays tribute to Stephen King’s classic coming of age tale STAND BY ME, with a special 30th Anniversary presentation of the 1986 Oscar-nominated drama on Monday, August 8—the date of its original release—starting at 8pE. An encore broadcast of the film will immediately follow at 9:35pE.

Based on King’s acclaimed short story “The Body,” STAND BY ME stars fan-favorites Wil Wheaton, River Phoenix, Corey Feldman, and Jerry O’Connell in one of their earliest feature films, as a group of friends whose lives are changed forever when they embark on a quest to find the dead body of a missing boy. Along the way, the boys are faced with their first real brush with death and a harrowing encounter with a local gang, as they reflect on themselves, their lives, and their friendship. STAND BY ME was directed by Rob Reiner, and boasts an impressive supporting cast that includes John Cusack, Kiefer Sutherland, and Richard Dreyfuss. 30 years later, the film has continued to resonate with generations of viewers, and was praised by author Stephen King as being the best adaptation of his work that he had ever seen.