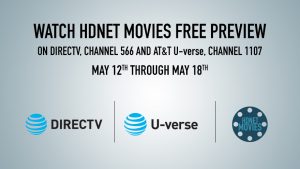 Los Angeles – May 2, 2016 – DIRECTV and AT&T U-VERSE HD subscribers will receive HDNET MOVIES for free May 12 to 18 as a part of a free preview of DIRECTV’s “HD Extra Pack” and U-VERSE’s “HD Premium Tier.” During the free preview week, the high definition movie network will showcase a number of exciting movie blocks, including a night of fright featuring movies from Stephen King, a “Quest for the Cup” with the beloved “Slap Shot” movie franchise, a Star Trek movie marathon and more.

Just in time for Friday the 13th, HDNET MOVIES kicks off the free preview week May 13 by honoring horror’s greatest storyteller, Stephen King, with the “King of Horror” marathon. The night starts at 8pE with a dog gone mad in “Cujo,” a small city terrorized by a werewolf in “Silver Bullet” at 9:40pE and “Thinner,” the story of a lawyer—cursed by a gypsy—who begins rapidly losing weight, at 11:20pE.

With the Stanley Cup Playoffs underway, join HDNET MOVIES in a “Quest for the Cup” on Saturday, May 14 featuring Paul Newman in the 70’s ice hockey comedy classic “Slap Shot” at 8pE, followed by the 2002 sequel “Slap Shot 2: Breaking the Ice” with Stephen Baldwin and Gary Busey at 10:10pE, and the network premiere of 2008’s “Slap Shot 3: The Junior League” at 12aE.

HDNET MOVIES celebrates this year’s 50th anniversary of Star Trek with the “Keep On Trekkin’” marathon featuring five Star Trek favorites on May 18 starting at 5:45pE with “Star Trek: The Motion Picture,” followed by “Star Trek II: The Wrath of Khan” at 8pE, “Star Trek III: The Search for Spock” at 10pE, “Star Trek V: The Final Frontier” at 11:50pE and “Star Trek IX: Insurrection” at 1:40aE.

Other highlights during the week include Clint Eastwood’s action thriller “In the Line of Fire” May 14 at 5:45pE; a comedy line-up on May 16 featuring Bill Murray’s military escapades in “Stripes” at 9:40pE and Steve Martin’s iconic comedy “The Jerk” at 11:30pE; and Sylvester Stallone’s mountain rescue thriller “Cliffhanger” on May 17 at 8pE.