Dan Rather Hosts a Marathon of Political Films on HDNET MOVIES Sunday, Nov. 6 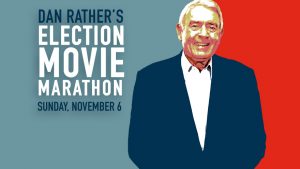 LEGENDARY NEWSMAN DAN RATHER HOSTS A MARATHON OF POLITICAL FILMS ON HDNET MOVIES NOV. 6, THE SUNDAY BEFORE ELECTION DAY

‘Dan Rather’s Election Movie Marathon’ Features Exclusive Insights and Special Hosted Wraps for Seven Films Including ‘THE IDES OF MARCH,’ ‘PRIMARY COLORS,’ and ‘IN THE LINE OF FIRE’

Los Angeles – Oct. 3, 2016 – Exercise your right to watch this November, as HDNET MOVIES presents Dan Rather’s Election Movie Marathon—a seven-film ballot packed with political thrillers, comedies, and more, airing Sunday, November 6 at 2pE, with an encore screening on Monday, November 7 at 11aE. The special event is anchored by Dan Rather, legendary newsman, and host of “The Big Interview” on AXS TV. Rather will be on-hand to introduce each film while providing his own priceless insight from over six decades in journalism.

The polls open at 2pE, with Gene Hackman in his last big screen role, as a past president who gets more than he bargained for when running for mayor against small town everyman Ray Romano in WELCOME TO MOOSEPORT, with Marcia Gay Harden. Next, John Cusack and James Spader star as law school friends whose relationship is greatly tested by life in the political world in TRUE COLORS, at 4pE; followed by Michael Douglas as a Secret Service man who suspects an assassin has infiltrated the White House in the premiere of THE SENTINEL, with Kiefer Sutherland, at 6pE. Then, Ryan Gosling stars as a campaign manager whose idealism is crushed by a twisting web of deceit in THE IDES OF MARCH, based on a play by “House of Cards” creator Beau Willimon and also starring George Clooney, at 8pE.

The night continues at 9:45pE, with John Travolta as a southern governor whose presidential aspirations are threatened by a sex scandal in PRIMARY COLORS, based on Newsweek reporter Joe Klein’s semi-fictional novel inspired by Bill Clinton, with Emma Thompson and Billy Bob Thornton; followed by Clint Eastwood as a troubled Secret Service agent racing to stop cunning madman John Malkovich from assassinating the president in IN THE LINE OF FIRE, with Rene Russo, at 12:15aE. The marathon comes to a close with Tim Robbins as a folk singer-turned-corrupt politician in the premiere of the 1992 satire BOB ROBERTS, with Alan Rickman and Gore Vidal, at 2:30aE.

Each film is packaged with exclusive wraparounds filmed at the Landmark Sunshine Cinema in New York City, as Rather applies his own experiences to the cinematic proceedings. Highlights include Rather discussing Jimmy Carter’s struggles to adapt to civilian life following his Presidency; explaining the strain that politics takes on friendships; revealing what it was like to report on the failed attempt on Ronald Reagan’s life, and the assassination of John F. Kennedy; sharing his thoughts on journalists’ complicated relationships with politicians; shedding some light on the author of PRIMARY COLORS; and sharing a humorous anecdote involving Lyndon Johnson, peacocks, and a nervous Secret Service agent.

“With the election season coming to a head, HDNET MOVIES asked me to be your political film pundit and guide you through the movie marathon—sharing my lifetime of political news expertise, as we enjoy these films together,” said Dan Rather. “We’ve got seven star-studded films that will surely scratch that political itch: from tense dramas that leave you on the edge of your seat, to hilarious comedies showcasing the joyful absurdity of our election process.”

For a complete schedule of films and times, visit: http://www.hdnetmovies.com/feature/dan-rathers-election-movie-marathon/

The complete marathon lineup is as follows (all times eastern):