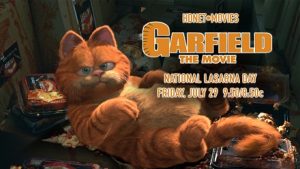 Los Angeles – July 18, 2016 – Heat up some lasagna and gather the family for a night of food and laughs, as HDNET MOVIES celebrates National Lasagna Day 2016 with a special presentation of the hit 2004 comedy GARFIELD, on Friday, July 29, at 6:35pE and again at 9:50pE

Based on the acclaimed long-running comic strip of the same name, GARFIELD stars legendary funnyman Bill Murray as everyone’s favorite lasagna-loving feline, whose life is turned upside down when his owner, Jon (Breckin Meyer), brings home a dog named Odie. Desperate to be rid of this new challenger for Jon’s affections, Garfield locks the poor pup out of the house. His scheme backfires, however, when Odie is dog-napped by fame-hungry TV host Happy Chapman, forcing Garfield to put his feelings aside as he teams up with an assortment of animals to save Odie and bring the villain to justice. The film also stars fan-favorite Jennifer Love Hewitt, and boasts an impressive list of all-star voice talent including Jimmy Kimmel, Brad Garrett, Debra Messing, Nick Cannon, Alan Cumming, and Debra Jo Rupp.