Out of Sight was the film that allowed Steven Soderbergh to transcend the confines of ultra-low budget arthouse cinema and bring his arthouse sensibility to mainstream Hollywood.  A master of craft, Soderbergh has worked as a director, producer, cinematographer, editor, writer, camera operator, second unit director, and assistant director, not as individual jobs in an ever-evolving and maturing career (though, he did that, too), but rather as multiple roles he will perform on any one of his productions. 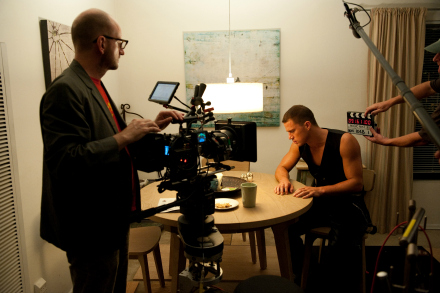 The director first came on the scene with 1989’s Cannes Film Festival Palme d’Or winner sex, lies, and videotape, which is important in film history because its international success was instrumental in sparking the 1990s independent cinema boom. That film cemented not only a market for profitable independent film exhibition, but also established decade-old studio Miramax as the home for quality independent filmmaking. The studio would be the breeding ground for directors like Quentin Tarantino and Kevin Smith.

“What was great about The Limey was that the time it took from the moment of meeting to discuss the movie to me delivering the finished film was nine months. The good news was, that fed in me a desire to then do something very normal, and it was during that period of making The Limey that I committed to doing Erin Brockovich, which was a project I had turned down during Out of Sight. And then I went right into Traffic and Ocean’s Eleven, which was a good run.”

Following several more low-budget films, none of which matched the critical success of sex, lies, and videotape, Soderbergh was offered the chance to direct the adaptation of a comedy-noir Elmore Leonard novel, Out of Sight, by a Universal exec, who had to convince him not to pass up the opportunity since the director had his sights on another film that was nearing a greenlight. Luckily, he chose the Leonard adaptation, a gorgeous film visually set apart with its soft focus, amazing cast of character actors (Steve Zahn, Don Cheadle, Luis Guzman, Catherine Keener, Dennis Farina, Ving Rhames), and a pitch perfect tone of seriousness and playfulness, pivotal to any Elmore Leonard tale. Aside from a great film, what it also produced was the capital for Soderbergh to move on to bigger projects.

Over the course of three years the director made The Limey, Erin Brockovich, Traffic, and Ocean’s Eleven, demonstrating Soderbergh’s strong working relationship with some of the most powerful and bankable talents in studio filmmaking, as well as more of those fantastic, less-known character actors. This blockbuster portion of Soderbergh’s career was also his most profitable. His six films to gross over $100 million include, in order: Ocean’s Eleven, Erin Brockovich, Ocean’s Twelve, Traffic, Ocean’s Thirteen, and Magic Mike.  The man made a blockbuster heist trilogy featuring a cast of the world’s most famous faces, a film that won Julia Roberts an Oscar, a multiple narrative film about drugs which was an international hit, and the (essentially) biopic that made Channing Tatum a star.  And he topped that all off by winning a Best Director Oscar for Traffic (a film whose influences the director cites as The Battle of Algiers, Z, and Sorcerer), by beating out Ang Lee, Ridley Scott, Stephen Daldry, and… himself; 2001 was the year that he was also nominated Best Director for Erin Brockovich.

As much as his career is marked by big Hollywood fare, it’s his variety that’s impressive, including micro-budget projects (Full Frontal, Bubble), films that blur narrative and documentary (K Street, The Girlfriend Experience), biopics (Erin Brockovich, Magic Mike, Che), many of which were experiments in digital filmmaking and distribution. In 2005, Soderbergh eschewed the traditional theatrical exhibition model with his film, Bubble, that premiered in theaters and simultaneously on HDNET MOVIES, with a quick release on home video only four days later. The film was the first high profile project to test what’s called “day-and-date” release, something that’s become the norm for low-budget, independent films nowadays, though still mostly eludes big Hollywood films. At the time it was revolutionary. The head of the National Association of Theatre Owners president went so far as to call the film’s release model “the biggest threat to the viability of the cinema industry today.”

“I’m always looking for something that will destroy the thing I just did,” he told Esquire back then. “You should be willing to throw it away or annihilate it. I’ll destroy my career if it’s the last thing I do.”

When Soderbergh isn’t making great films, or challenging the accepted wisdom of filmmaking or Hollywood exhibition strategies, he’s just kind of an odd guy and a mega-film buff, who happens to also threaten quasi-retirement from time to time. He did so first in 2008, but quickly backed down from his comments. And again, in 2013, he suggested that he had a five-year plan to transition away from filmmaking, and it shows. His output has slowed but the quality of what he’s putting out there certainly hasn’t. 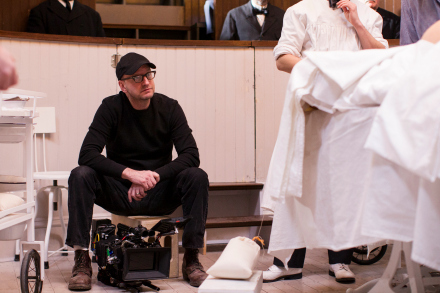 Most recently, the director reminded audiences what his control freak personality can achieve when he brought his talents to television with Cinemax’s The Knick, which brings a gritty, verité style to a story about a hospital at the start of the 20th century. Soderbergh’s visual style adds to the gruesome authenticity of the medical procedures seen in the show, and we can almost solely credit the director, since he also serves as cinematographer, camera operator, and editor for the entire season. While it’s one thing to serve multiple positions for a film, on a TV series that’s almost madness. With a typical episode taking seven days to shoot, the production schedule on the series meant that Soderbergh was literally devoting every waking hour (and more) to the production for 70 days. And he plans to do the same for the second season, already in the works.

The Knick, however, is the only project since 2013 for which he’s served as director. But his ties to film and visual storytelling will likely never fray, even as he seems committed to retiring from directing. Soderbergh is producing a TV project for Amazon, the sequel to Magic Mike (he’s also serving as camera operator, under a cinematographer who’d previously worked for him), and a TV adaptation of his film The Girlfriend Experience.

Aside from TV and producing, the director has also been quite productive on the internet, recently releasing through his website a 110-minute recut of Stanley Kubrick’s 2001: A Space Odyssey and, after that, a version of Steven Spielberg’s Raiders of the Lost Ark in only black and white. Many film purists would balk at both exercises, going as far to call them blasphemous but they’re not out of character for the filmmaker who’s known for challenging the status quo, pushing new boundaries, and subverting expectations. Whether or not this retirement from directing proves true, the truth is that the film community will never truly lose the contributions of Steven Soderbergh.