Stanley Kubrick is one of film history’s finest directors. A formalist and an auteur, with a unique filmography that, though limited, showcases what are considered to be some the most critically acclaimed films of all time. Looking at Kubrick’s filmography as a whole, it is easy to discern that his films deal broadly with the grand ideas of humanity and civilization. Look a little closer and one can find the use of one space over and over again to define this relationship, a space that, in his narrative and his compositions, dominates and plays a fundamental role: the bathroom.

Stanley Kubrick was born July 26th, 1928 in the Bronx, New York. At 12 his father taught him chess. The following year, his father gifted Stanley a camera for his 13th birthday. After that point, photography and chess both became lifelong passions for the director.

“If chess has any relationship to filmmaking, it would be in the way it helps you develop patience and discipline in choosing between alternatives at a time when an impulse decision seems very attractive.” – Kubrick

Even with his passions, he put little effort into his traditional education. In high school, Kubrick would often skip classes to catch double features at the theater. Still, he was chosen as the official school photographer for a year. Unable to gain admission to many colleges, Kubrick began attending evening classes at City College of New York. During that time he began seeking out jobs as a freelance photographer, and by the time he was finishing school he had sold a few series to Look magazine. In 1946, he became an apprentice photographer for Look, before advancing to a full-time staff position.

From there, Kubrick began planning a transition into film, beginning with a couple of short documentaries. In 1950 the director used his savings to self-finance Day of the Fight, about a middleweight boxer during the height of his career. After a couple of other documentaries, Kubrick felt he was ready to try his hand at a narrative feature film. He quit his full-time job with Look and began work on Fear and Desire. The film was funded primarily by the director’s friends and family. Though Fear and Desire showcases themes that would continue to be fundamental to much of his career, it was his least critically acclaimed film. In fact, in later year’s Kubrick made an effort to acquire all outstanding prints in order to have them destroyed. However, with the experience of Fear and Desire, Kubrick’s second feature, the noir Killer’s Kiss (1955), demonstrated a much more confident filmmaker, with a knack for composition and lighting. Though it was also financed primarily by friends and family, Kubrick’s commercial career would begin with his next feature, the heist movie The Killing. From there the rest is, as they say, history.

Kubrick maintained an illustrious career, and a level of creative and critical appreciation that few other filmmakers have ever received. He has directed four of the American Film Institute’s 100 Most Greatest Movies: 2001: A Space Odyssey (1968) at #15, Dr. Strangelove or: How I Learned to Stop Worrying and Love the Bomb (1964) at #39, A Clockwork Orange (1971) at #70, and Spartacus (1960) at #81. Having only made thirteen feature films in total, that’s pretty impressive. That so much of Kubrick’s limited filmography is considered some of the greatest films of all time speaks to the unique cinematic experience that the auteur crafted for audiences over the length of his career. 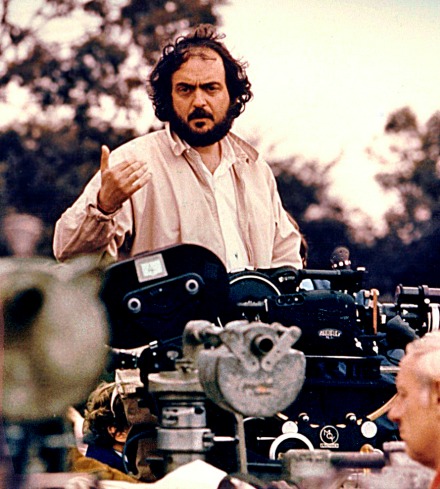 Kubrick on the set of Barry Lyndon.

In the bulk of Kubrick’s work, there exists a common thread dealing with the grander ideas about the fundamentals of our humanity and our relationship to civilization. Posing questions such as: Does civilization make humanity more than just the sum of animal instincts? Or does civilization merely mask those instincts to begin with, and to what consequences? Kubrick’s films dive deep into this most basic of critical arguments and he does so by using bathrooms. For the director, the bathroom functions as the space that represents the dynamic between human nature and civilization most clearly. The one place where humans go to get back to the basics of their animal nature, so to speak, yet, also, the space which civilization has sanitized, ritualized, and formalized the most fundamental act of being human: our bodily functions.

To most people this comes as a bit of surprise, as it’s not something that stands out; but, from Lolita forward, every single Kubrick movie employs bathrooms in the general mise-en-scene and for some of his film’s most important scenes. This argument has been made quite well in film criticism circles, notably “Kubrick’s Obscene Shadows” by Susan White ( http://bit.ly/MExHoo ) and “Plumbing the Abyss: Stanley Kubrick’s Bathrooms” by Philip Kuberski.

What the theory boils down to is that the social underpinnings of humanity, our engagement in social contracts, are subverted and thwarted by humanity’s animal instincts: sex, selfishness, and violence. Meanwhile, for Kubrick, one space exists wherein humanity’s animal instincts are revealed, despite civilization’s desire to cover it up: the bathroom. As the one main sanctuary in many societies, the bathroom is often the only room where people can lock themselves in privacy. But the bathroom also operates as a disciplinary system, a place of ritual and indoctrination. Simply think of the concept of toilet training, society’s indoctrination tool to move human children away from their most base instinct, to discipline the process and hide the act. 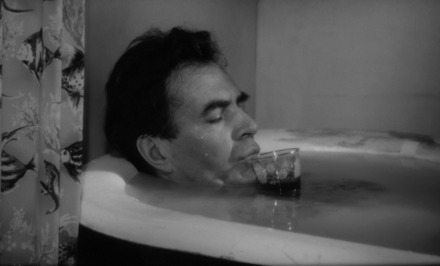 Lolita was Kubrick’s first film that utilized the bathroom space as part of the story. This begins with Charlotte’s tour of the house, including the bathroom, where she yanks the chain to flush the toilet and laughs, awkwardly and innapropriately. Only later, this same space is where Humbert goes to hide from and evade his marital obligation to Charlotte. After her death, Humbert is caught in the bathroom by his neighbors, who arrive to offer condolences; this very private space in suddenly inverted into public space. Through it all, the bathroom mediates many of the film’s most pivotal moments.

In Dr. Strangelove, toilets, like the rest of the movie, are steeped in humor and satire. General Turgidson is in the bathroom when the news is delivered that bombers are entering Russian airspace, his girlfriend outside telling the nation’s leaders that he’s “very tied up at the moment.” Let’s not set aside the fact that the war room set resembles a giant toilet bowl. Or General Jack D. Ripper, the man who sets in motion the Doomsday Machine, who fears that the commies are out to take his “precious bodily fluids,” who then locks himself in the bathroom and commits suicide, flushing away the key to salvation with him. And yet, Strangelove isn’t Kubrick’s only suicide in a bathroom. Full Metal Jacket sees Private Pyle kill himself and his drill instructor in the barracks bathroom, sitting on the toilet. But it sets the stage for the violence the soldiers have been trained to perform, and will have to enact, in the film’s second half, in Vietnam. The place that the soldier’s refer to as, “being in the shit.” 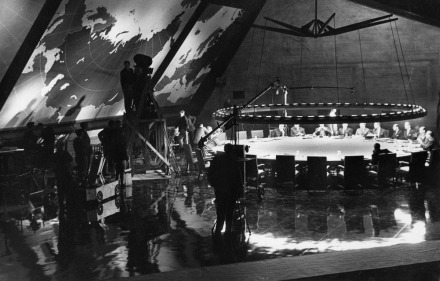 The war room curiously, but not surprisingly, looks like a big toilet bowl.

In 2001: A Space Odyssey, the depiction of the evolution of man and space travel, the extents of humanity’s technological innovations are widely on display. No more so than with the Zero Gravity Toilet that’s prominently featured, with a ten-point instruction manual.  Despite all of humanity’s achievements, the simple act of going to the bathroom in the future has somehow become an arduous and complicated task.

The technological evolution of man results in the act of going to the bathroom requiring 10-step instructions.

The Shining features three of Kubrick’s most iconic bathroom scenes, in the confrontation between Delbert Grady and Jack Torrance and, before that, the encounter with the alluring woman who transforms into a decaying corpse, and finally the bathroom where he attempts to kill his wife. In The Shining, the bathrooms become places where the power of masculinity is addressed, first with Jack’s fantasy and sexual desire, then with Grady, where the conversation becomes about killing his wife and child, and lastly, when Jack attempts to kill his wife as she hides in the bathroom.

Eyes Wide Shut drives home the bathroom as a mediated space in the marital realm, like Lolita before it. The opening scene features Alice, sitting on the toilet, while Bill, her husband, gets ready. Despite the shameless exposing of her bodily functions to her husband, the couple’s intimacy, trust, and communication is troubled. Alice asks Bill how she looks, and he responds that she looks fine without even looking. It is later, when Bill begins to realize that Alice’s sexual desire exists beyond and without him that his journey into darkness begins.

All of this is only a brief review of Kubrick’s intentions with bathrooms as a symbol of humanity’s relationship to civilization. And, for those still interested, again, Susan White and Philip Kuberski pieces are highly recommended. But, from this it’s clear that Kubrick’s use of bathrooms are no mere coincidence but part of the larger statement about civilization’s ability to sanitize and discipline human impulse. And in that, the bathroom becomes part of Kubrick’s larger statement in his limited but powerful filmography, ingrained as part of the visual and narrative symbolism exploring the dynamic between humanity’s nature and its repression by civilization.