Nicolas Cage is a national treasure

Nicolas Cage is an enigma. When asked about his filmography and what kind of actor he strives to be, he answers, “Eclectic. I want to try everything.”

By most accounts, Nic Cage should not be a movie star. But with over 80 acting credits to his name (totaling just under $2.6 billion in box office), and numerous leading roles in everything from romantic comedies, to thrillers, to sci-fi, to big-budget action films, Nic Cage is definitely a movie star. Despite his weird look, questionable hairline, and seemingly outlandish personality, the man can play a love interest and a psychopath with the same intensity and sincerity. 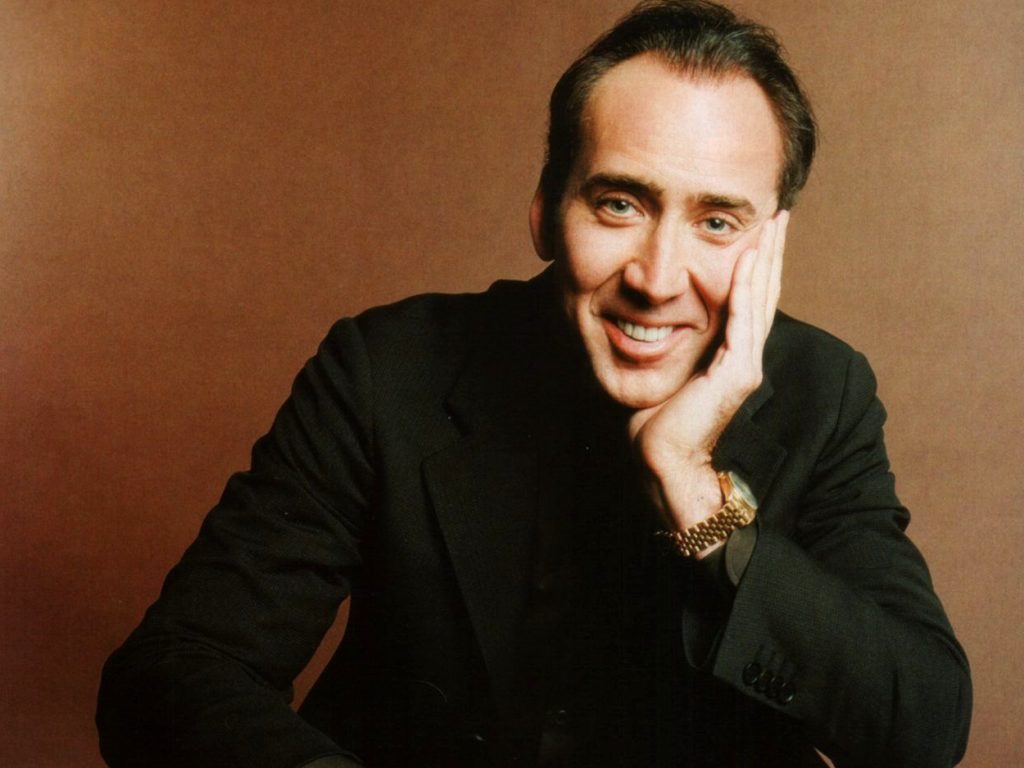 Nic Cage was born Nicolas Kim Coppola, on January 7th, 1964, to parents August Floyd Coppola, a literature professor, and Joy (Vogelsang), a dancer and choreographer. As a young man he attended Beverly HillsHigh School, along with many other famous alumni, and later UCLA’s School of Theater, Film and Television. From a young age Cage aspired to acting, it was in his blood. So ingrained was his desire that in some ways it came naturally to him, to the extent that when he was bullied as a young kid he dealt with it by returning to school the following day in costume as Nic’s older cousin, who confronted the bully and told him to lay off his cousin Nicky, or there’d be trouble later. The bullying ended there. The young Nic also spent a lot of time making Super 8mm movies with his brother. Later, to get his acting career started, Cage’s uncle, Francis Ford Coppola, would prove helpful.

Cage received his first film role – and the only one for which he’s credited as Nicolas Coppola – in Amy Heckerling’s Fast Times at Ridgemont High.  After Fast Times, the actor assumed the Cage moniker, he desired his career to be the result of his talents and not his name. Despite this, his uncle Francis Ford Coppola helped him with three of his early jobs (Rumble Fish, 1983, and The Cotton Club, 1984), concluding with his first big role in Peggy Sue Got Married (1986). However, the film had the studio seeking to remove Cage from the film due to his performance, namely the high-pitched voice he settled on for the character. Coppola helped keep him in the role, despite even the director’s own misgivings, but Peggy Sue was the last film the two worked together on, which allowed Cage to set off on his own path.

The year following Peggy Sue was a defining one for Cage, particularly his role in the Coen brothers’ frantic farce, Raising Arizona (1987). Surprisingly, what actually drew the brothers, Joel and Ethan, to Cage was his much maligned performance in Peggy Sue; they thought that the bizarre cartoon-y quality was perfectly suited to the role. That same quality also endeared him to Cher, who vehemently pursued Cage for Moonstruck (1987), even against the will of the studio and director, Norman Jewison. With Arizona and Moonstruck, Cage had established himself as somewhat of a leading man, even if it was the bizarre everyman. He was now in demand.

By this time, Cage had established a defined acting style that was beginning to gain notice as something unique and different. The actor himself has said, “Dynamic acting has been lost on account of going for reality.” Indeed, characters grounded in reality are not in Cage’s wheelhouse. Instead, characters whose emotions are a little less grounded are his bread and butter. As fellow actor Ethan Hawk has said of Cage, “He’s successfully taken us away from an obsession with naturalism into a kind of presentation style of acting…” This kind of presentational style of acting, however, has led to the issue of distancing Nic Cage the actor from Nic Cage the person. And, not being one to put himself in a box, Cage sought alternate ways to play with his persona and image. David Lynch’s Wild at Heart (1990) would allow Cage to play with these ideas of impersonation and parody. Lynch and Cage turned out to be a perfect off-kilter match for each other. 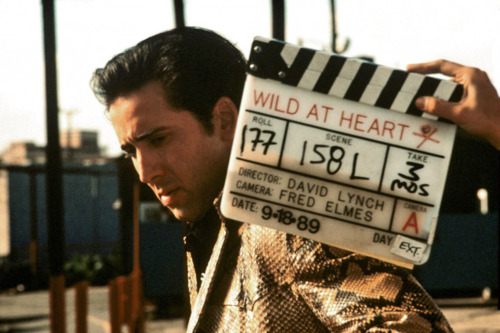 Following this period, Cage expressed a desire to broaden his appeal and stature in Hollywood, which led to several naturalistic turns in the trifecta of Honeymoon in Vegas (1992), Guarding Tess (1994), and It Could Happen to You (1994). Cage further developed his leading man persona over the course of these films, endearing himself to a broader audience. The problem for Cage was that naturalism gets boring. Understandable, given that Cage, known for his real life excesses as much as his performative excesses, relishes the opportunity to try new things, to inhabit unconventional characters, and emotions that typically go unexplored or are more subtly drawn.

“There’s a fine line between the Method actor and the schizophrenic,” according to Cage. And the actor definitely walked the line of method actor earlier in his career, but has admitted that it has since tapered off. Yet, excess is nothing new to the actor, whether it’s the cars, homes, castles, and comic book collections in his personal life, or the cockroach eating in Vampire’s Kiss, or binge drinking (Leaving Las Vegas, 1995) and gambling (Honeymoon in Vegas) as research for roles. For Honeymoon, Cage said that his gambling research took him to extremes, one night losing $10,000 in a single hand of Blackjack. He later went running for an hour at the hotel gym to feel better, only to wake up and win it all back the next morning; but the actor says that it helped teach him the dangers that he could easily fall victim to. With Leaving Las Vegas, Cage capped off a period of broadening his appeal by committing to an unappealing character, the very dark role of an alcoholic who goes to Vegas to drink himself to death, only to find a deep connection in an uneasy relationship with a prostitute (Elisabeth Shue). The film earned both actors rave reviews and led to Cage’s first and only Oscar win in 1996, though he was nominated again in 2003 for Adaptation.

In the mid-nineties, Cage would come to be known to entirely new audiences through genre turns in the big-budget action movies, The Rock (1996), Con Air (1997), Face/Off (1997), and Gone in Sixty Seconds (2000). While these films found massive box-office success and commercial appeal, that doesn’t mean that Cage set aside his well-defined, excessive acting style, quite the opposite, actually. All of these films relied on Cage’s offbeat and bizarre appeal, particularly John Woo’s Face/Off, the operatic action movie with excessive performances from both Cage and John Travolta. In interviews, Cage admitted to drawing on the same acting style he utilized for Vampire’s Kiss, a style that harkens back to Cage’s youth and early love of film, when he first encountered and became obsessed with early German expressionist films such as, The Cabinet of Dr. Caligari (1920) and Nosferatu (1922). And while Cage has dabbled in multiple genres and independent films after his defining success as a 90s action film star, in the 2000s he went on to become a franchise star of the popular National Treasure films.

Time and again Cage has been described with the following words: bizarre, flamboyant, edgy, intense, eccentric, excessive, the list could go on. He’s become a man who the internet can have field days with, including viral videos of his changing hair styles for roles, and of him “Losing His Shit.” Those moments of Cage in character, displaying raw emotion, when the full force of his rage, his lunacy, and the depths of his emotions come spewing out has, over time, become a trope of Nicolas Cage films. It’s even gotten to the point where more than a few of Cage’s films have become parody of Nic Cage performances. Nowhere is this more evident than with Werner Herzog’s Bad Lieutenant: Port of Call – New Orleans, which finds Cage playing a crack-smoking, painkiller addicted New Orleans police sergeant. Like his pairing with the Coen brothers or David Lynch, Herzog and Cage is a magical combination of experimental style and excess. And knowing Herzog, it’s more than likely that the director chose Cage to inhabit the role in ways that only Nic Cage can, leading to such epically Nic Cage scenes such as when his character, high on crack, has a conversation with a lizard.

Maybe Nic Cage is not an enigma. The more one learns about him the more he starts to make a lot of sense. With an extensive filmography that grows with each year, Cage is a working actor. He doesn’t stop. Year after year he tries new things, explores new avenues for his career, and has fun. If there’s one thing that is clear from spending time with the films of Nic Cage, it is that the man loves acting and puts a lot of thought and care into his performances. And while his name doesn’t come up along side Robert De Niro, Sean Penn, Marlon Brando, or any other of history’s top actors, it isn’t that he hasn’t earned that, because in many ways he has. While the critical quality of his films varies greatly, the massive effort of his performances overshadows many of his weakest films. His acting styles, the thought involved in choosing his roles, and the performances he gives prove that Cage is more than just a stylized performer. He’s an actor with a deep love of film who curates his filmography more than it would initially appear. And, as such, he’s endeared himself to audiences many times over. Indeed, Nicolas Cage is a national treasure.

“I invite the entire spectrum, shall we call it, of feeling. Because that is my greatest resource as a film actor. I need to be able to feel everything… [to support] my emotional facility to be able to perform.”